At long last, it’s election day, and the American people will finally get the chance to make their voices heard. This year is easily one of the most competitive midterms of the last half-century.

Over the last three weeks, Republicans have gained considerable ground across the country. Before their surge, Democrats were clear - though far from decisive - favorites to win a Senate majority. Now, the Senate is locked in a true tossup. Democrats are lucky that they had a big enough lead in Arizona, Georgia, New Hampshire, and Pennsylvania to suffer some bad headwinds and still emerge with a very serious shot of winning. I still have them as the narrow favorites in all four races, although their edge in Georgia and Pennsylvania is now less than 0.5%.

Republicans are slightly favored to flip Nevada. This race has been surprising given the shift elsewhere in the country. Catherine Cortez Masto has been a tough out for Republican Adam Laxalt. If she had lost the same ground as her fellow Democrats, she'd be a heavy underdog, but she still has a 45% chance of pulling off an upset.

The most likely outcome is a range of results between Republicans controlling 54 seats and Democrats controlling 51 seats. Democrats could potentially win more than 51 if there’s a medium polling miss nationally or locally in their favor. That would increase their odds of an upset Ohio, North Carolina, and Wisconsin, which are still reasonably competitive. If Republicans benefit from a history polling error - likely bigger than 2020 - they'd have an outside shot in Washington or Colorado.

I realize this is a broad range of feasible outcomes. Forgive my lack of precision, but 2022 is not a normal election. When I designed the Senate forecast, I tested it on every election cycle since 1970 to ensure it was as accurate as possible. The single most competitive election in terms of the chance both parties have of winning the majority is the 2022 election cycle.

The House is more favorable to Republicans. I have them with just under a 70% chance of winning and am on track to win 223 races. You might have noticed that my Forecast gives Democrats a higher chance of winning than most of my competitors. I think the key lesson from the last few election cycles is that misses are now more likely in polling and election forecasting, primarily because far fewer people are agreeing to answer calls from pollsters.

No one will be surprised if the polls underate Republicans again. I also wouldn’t be surprised if pollsters overcompensated for their mistakes in 2020 and 2016, and underestimated Democrats this time around. In fact, Democrats would be on track for 217.6 to win the House if outperform my projections by 1.56% nationally - and they need 218 to keep their majority. Of course, that cuts both ways, and the Republican's potential majority could balloon to 240 seats if they benefit from a polling error.

At 4 pm, RacetotheWH will be launching our live House and Senate Forecast - our best prediction at the odds both parties have of winning a majority, updated throughout the night and into the next few days as results pour in from across the country. We will have an up-to-date prediction for every single state and Congressional race across the country.

The Forecast Change Throughout Night Based on Three Factors:

The last thing we want to do is to cause a heart attack in all of our viewers by having far too rapid and extreme shifts back and forth. I’ve designed the live forecast to be cautious, especially in the first few races. The results from election day will have a far greater influence once we get a more substantial number of races called.

Our forecast is also designed to be as clear and easy to read as possible, so you can see which races have been called most recently, and where the outstanding vote is left to come from.

Finally, here’s our guide for watching election day like a professional. Switch between the images to see which states will close in each hour, and which key races to follow across the country. 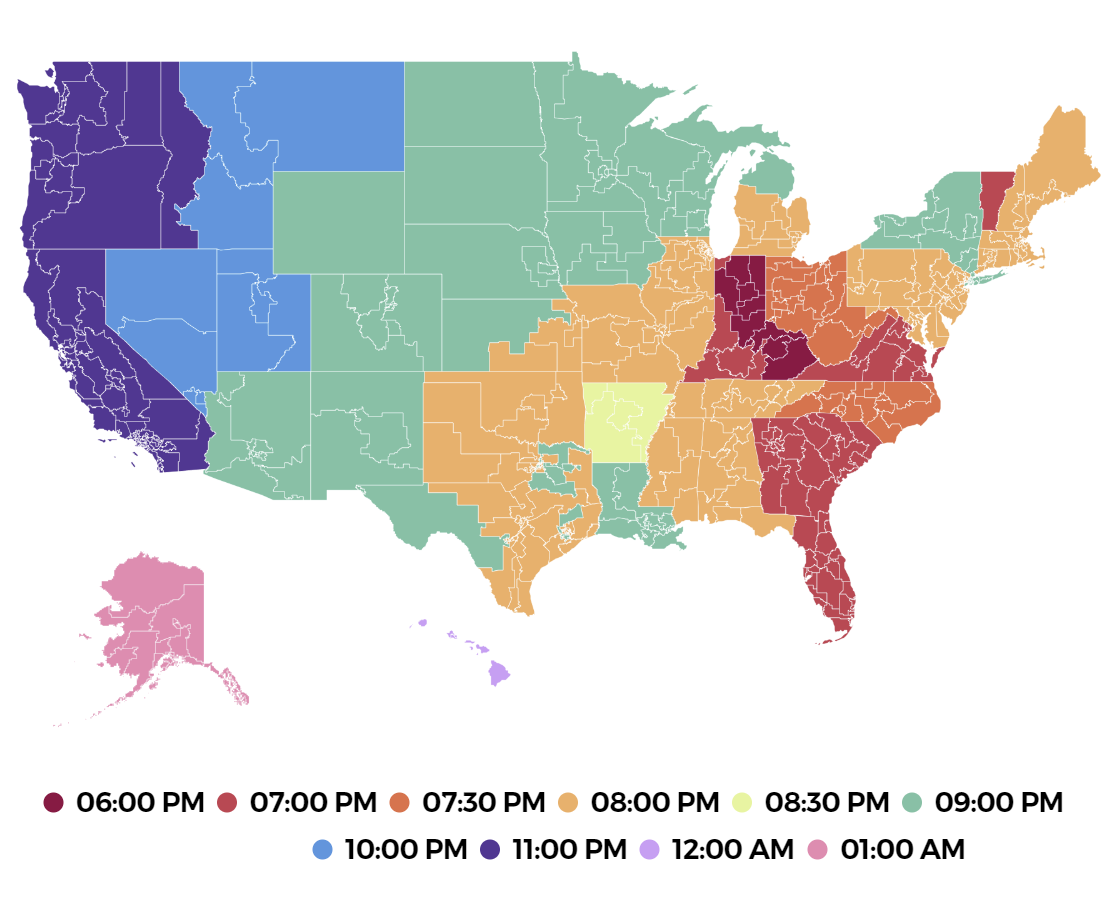 This map shows when the polls will close across the country, using Eastern Standard Time. Switch between the other images to read about the key races to follow in each state 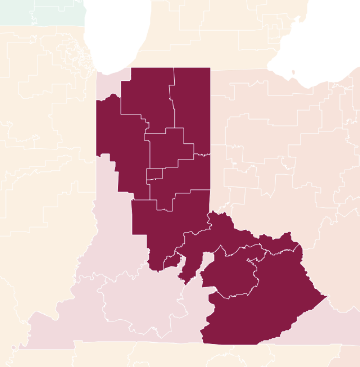 The first batch of races will come from parts of Kentucky and Indiana at 6 pm - excluding the competitive IN-01, which is in a different time zone. These races are all Safe D or Safe R 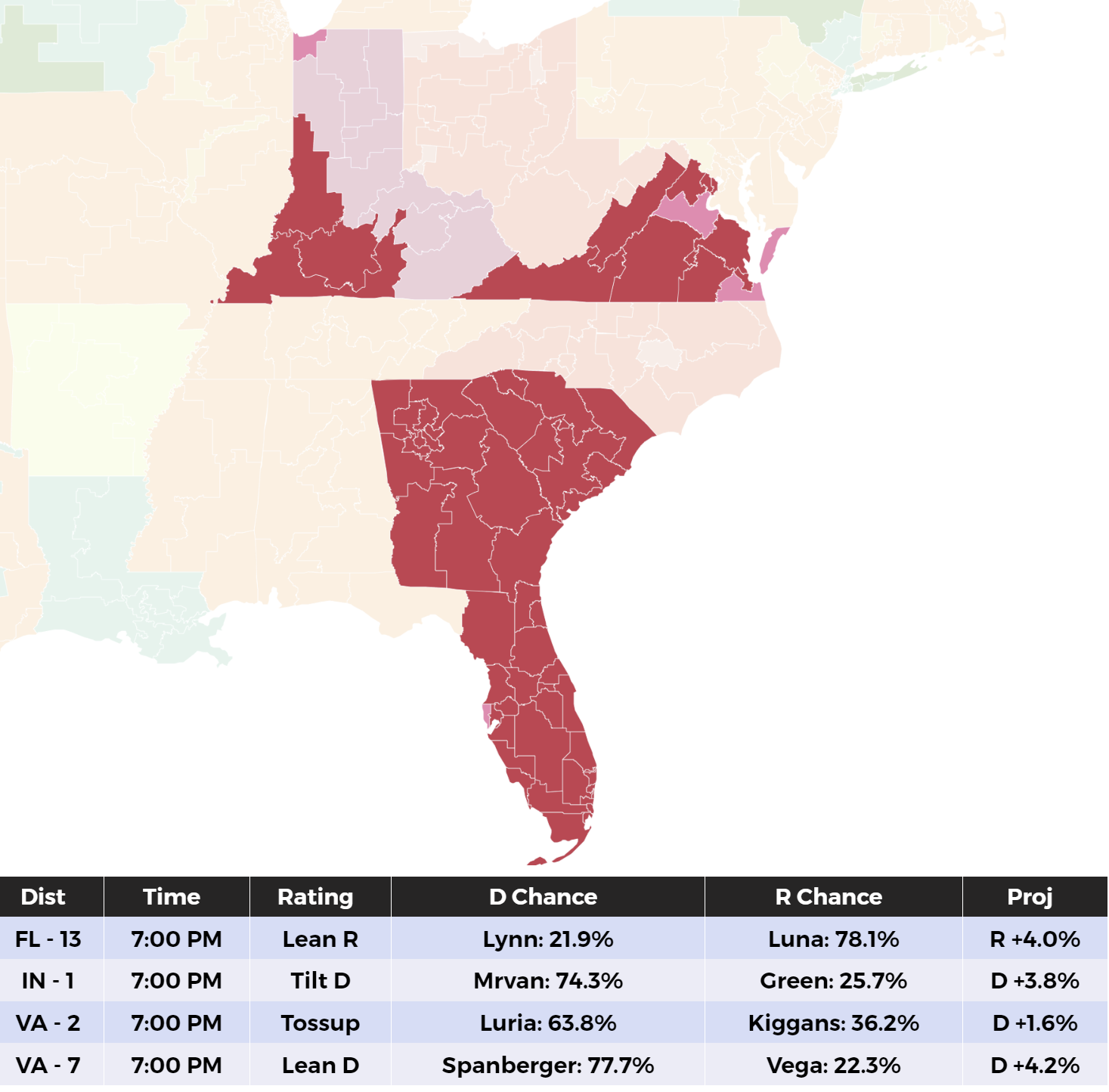 At 7 pm, we have our first batch of highly competitive races. Keep a very close eye on the FL-13, IN-1, VA-2, and VA-7. If Democrats can win 3/4 of these races, it's a signal that the House Majority could be in play. 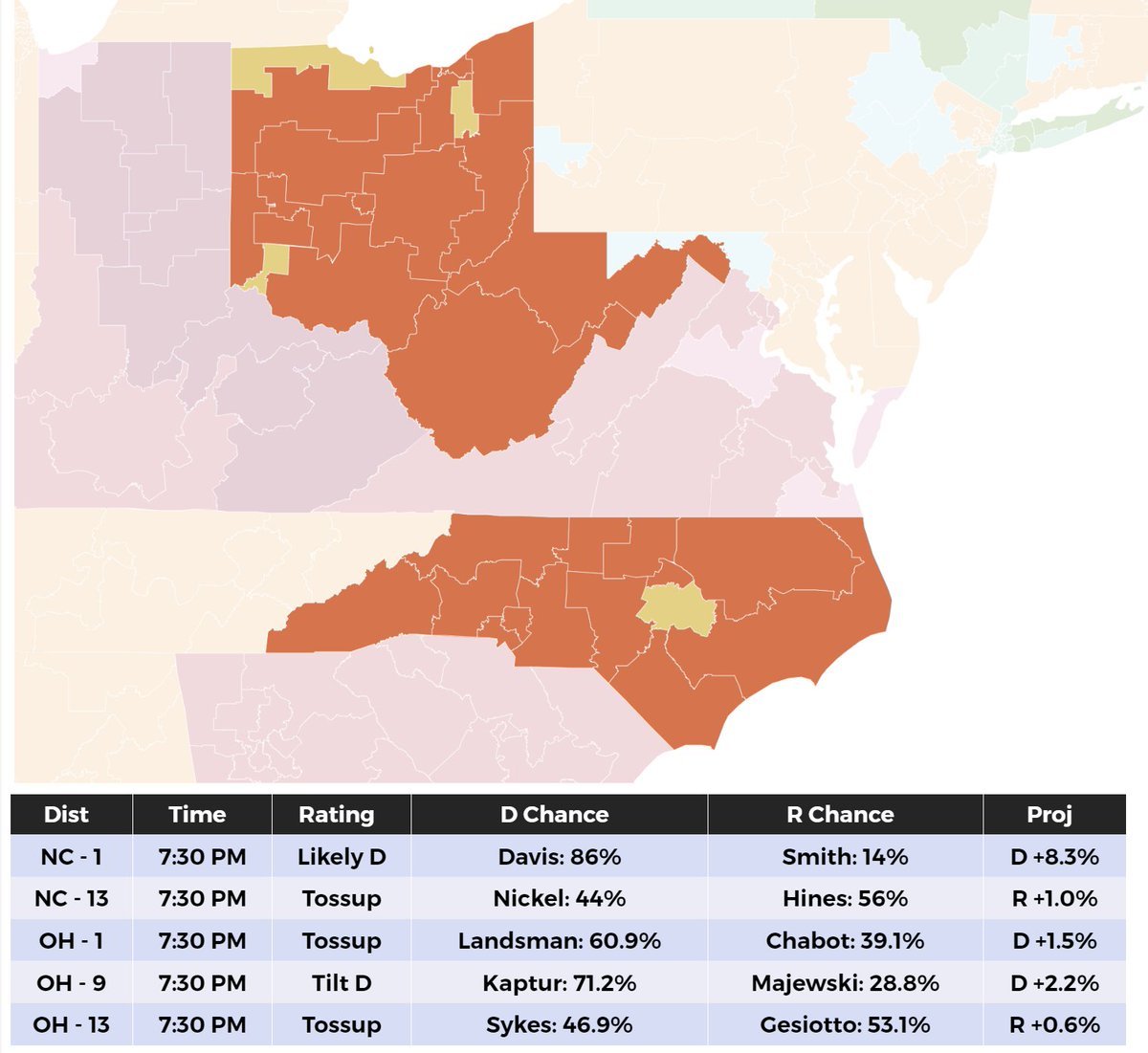 At 7:30 pm, we'll start getting results in Ohio and North Carolina, both of which count fast! There are four ultra-competitive races in the NC-13, OH-1, OH-9, and OH-13. Will some of the more extreme Republicans underperform tomorrow? The NC-1 and OH-9 will provide our first clue 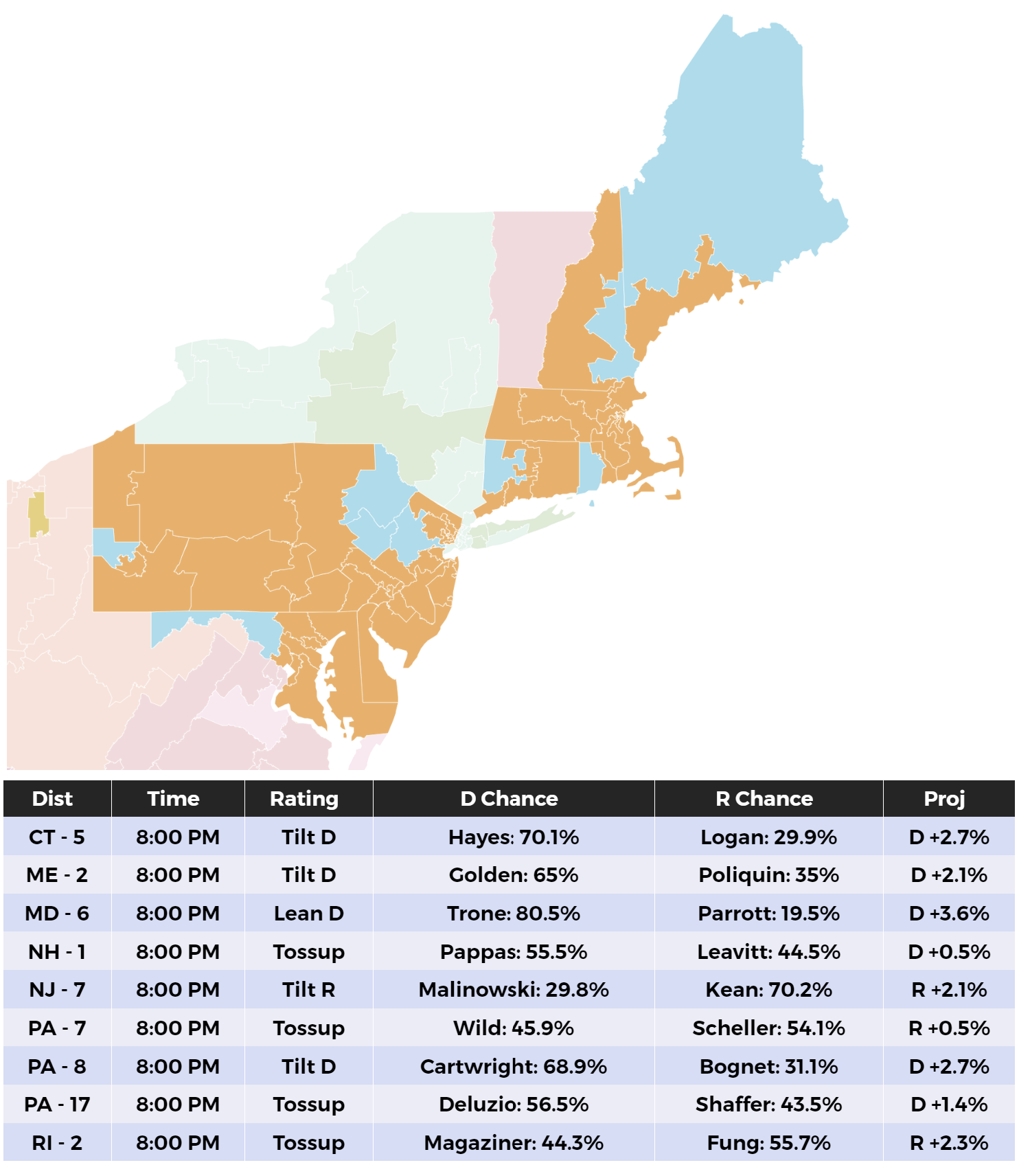 The floodgates will open at 8 pm. In the North East, we'll see if Republicans can compete in the handful of democratic districts where they have polled well. Watch RI-2, and CT-5. In Maine, Jared Golden hopes to win in a red district. We also have 3 tossups in PA, and 1 in NH. 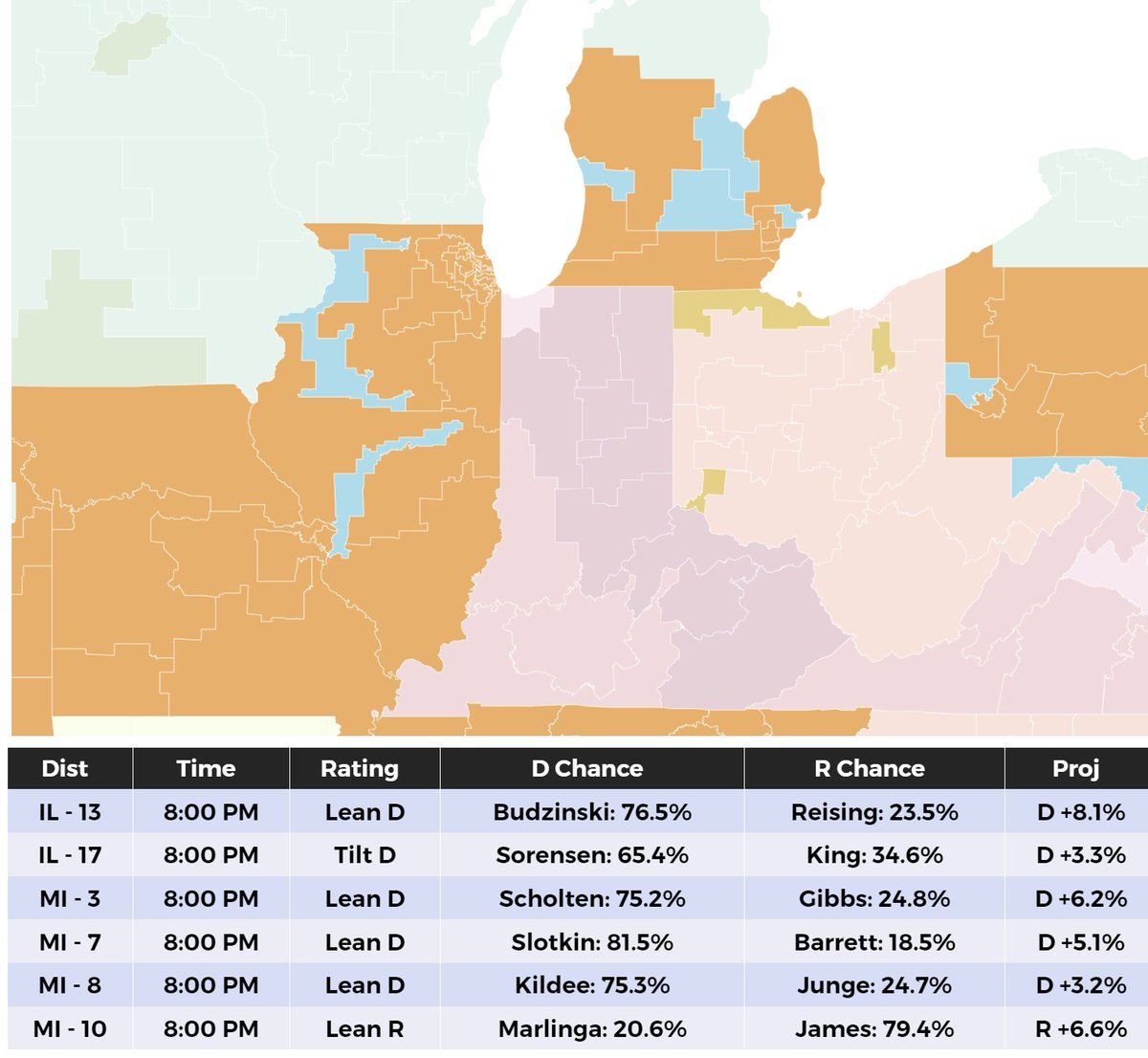 Early voting has been tremendous in MI, a sign that the abortion referendum could juice turnout. That's a good sign for Democrats, who are favored in 3/4 top races there. We also have two crucial Illinois races (IL-13, IL-17). 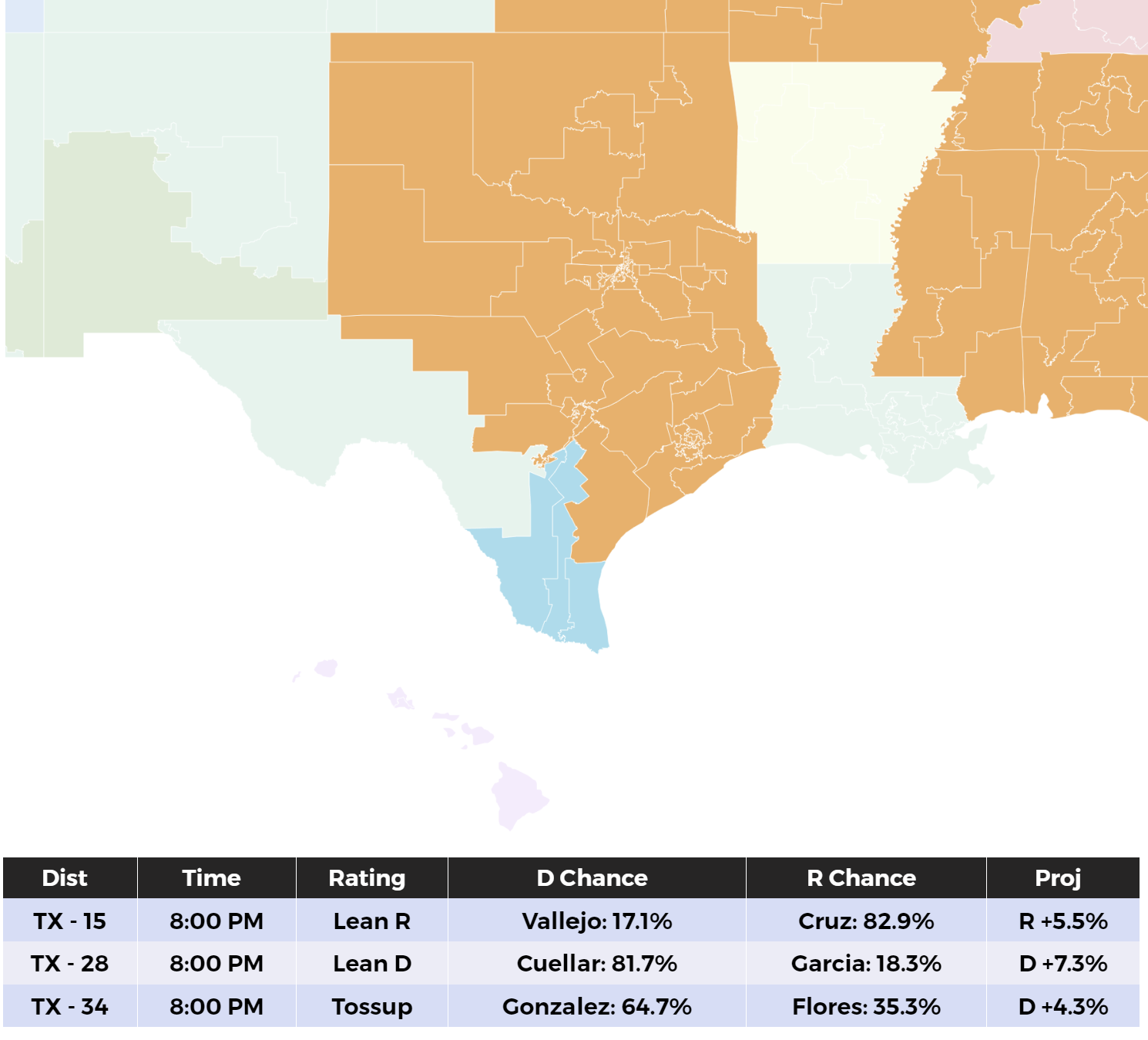 Last at 8, we have three crucial races in South Texas that will test whether Republicans can build on their 2020 gains with Latinos. The TX-34 is a tossup (Gonzalez v. Flores). If Dems can upset in the TX-15, or Reps win TX-34, it could say a lot about Texas's future. 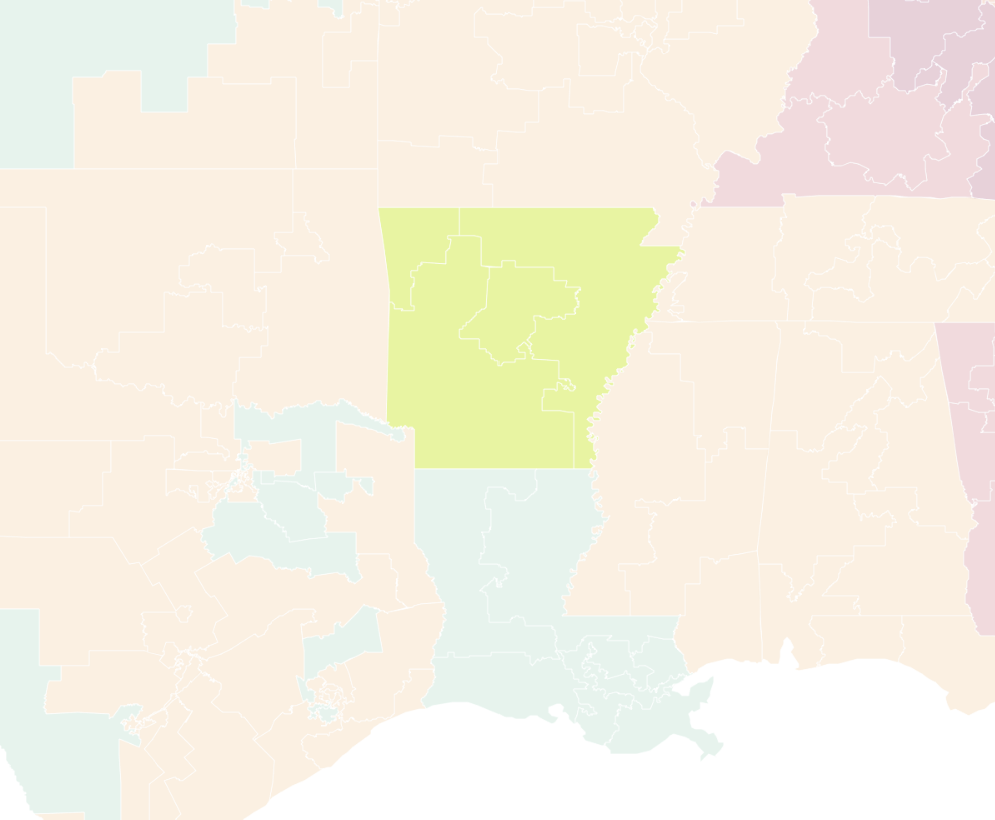 At 8:30, Arkansas will close. There are four safe R seats here. 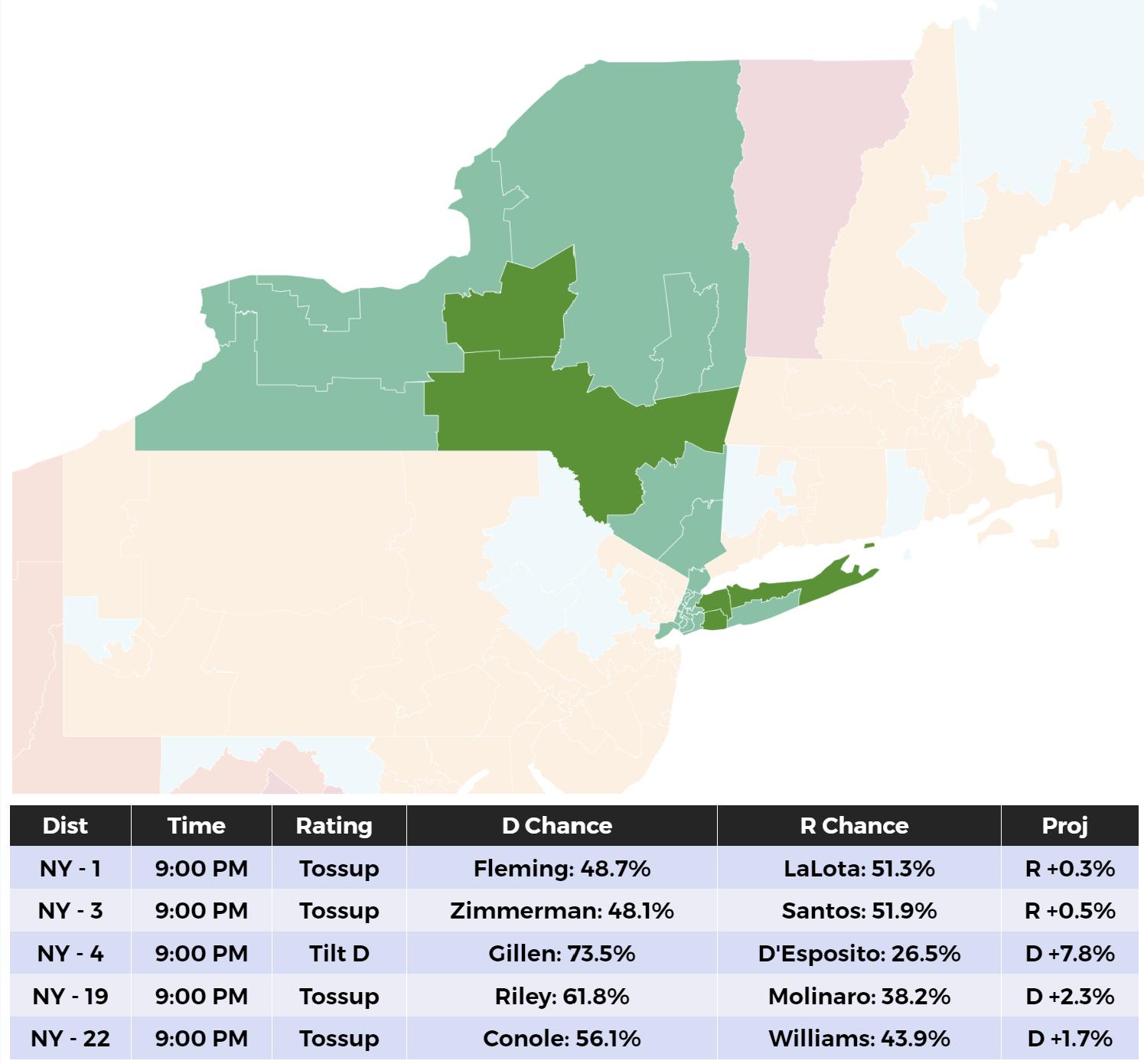 New York closes at 9 - and if the national environment is close, NY could play a decisive role this year. It's home to five critical elections - including 3 in Long Island. The NY Gov race has gotten a ton of press, and that could lead to a high turnout across the board on e-day. 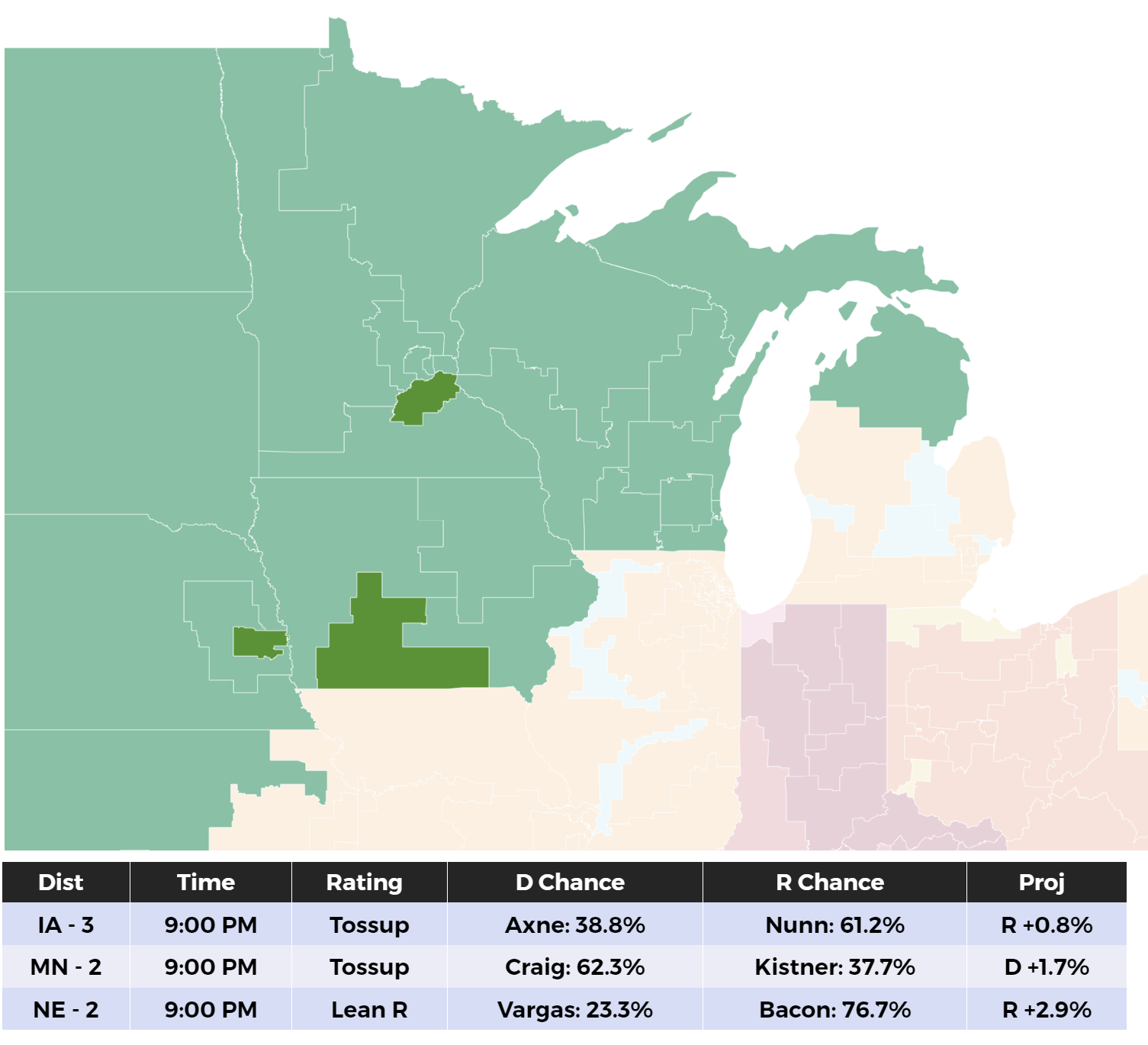 Polls close in the Midwest, and it will be go-time for Cindy Axne, the last survivor of 3 IA D Reps that won in '18. In MN, Craig hopes Dem's strong special election performance in MN-1 is a good sign for her re-election. Bacon is favored in NE-2, but Dems have spent big there. 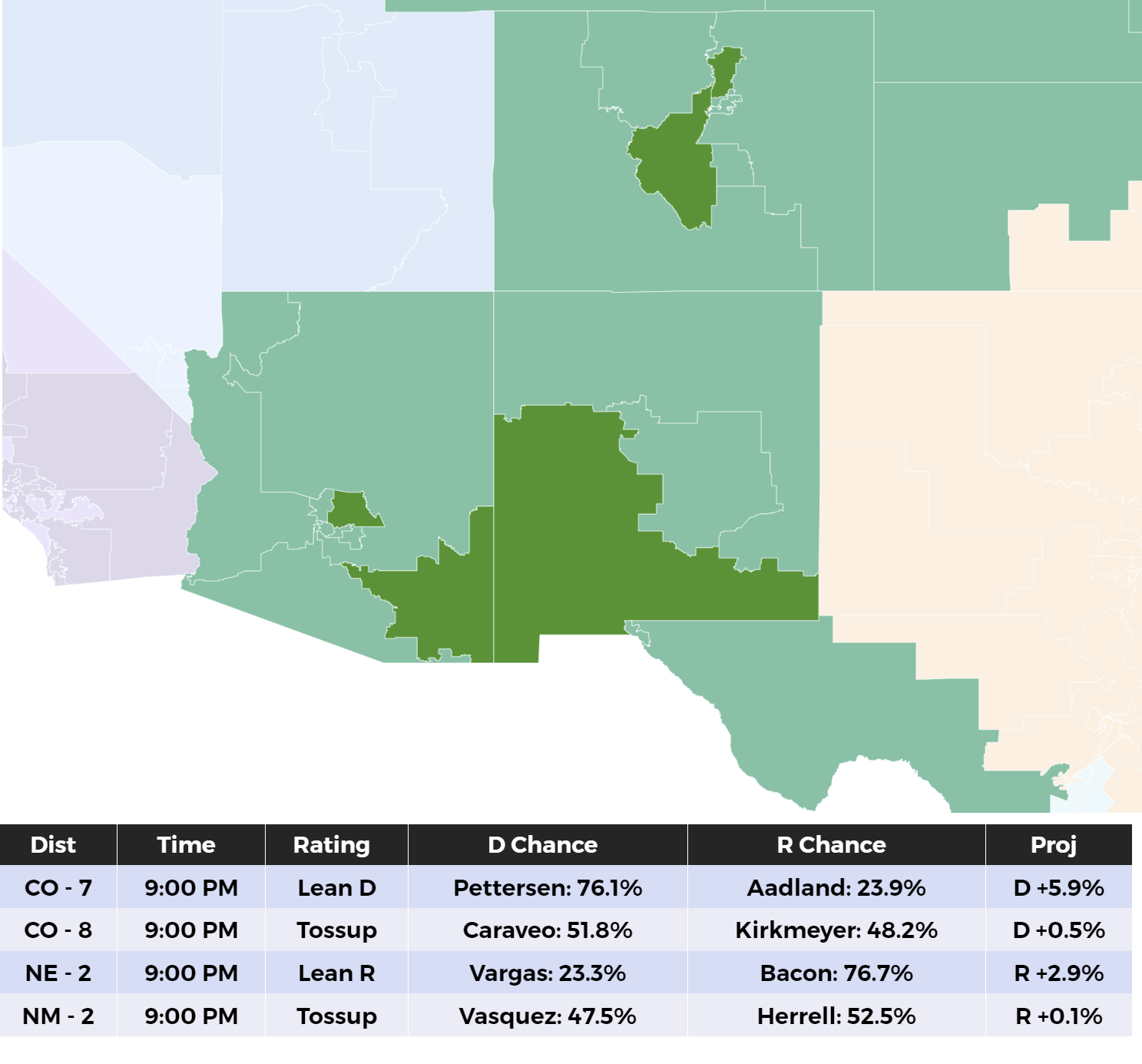 In the Southwest, Colorado features one of the nation's most fair maps - leading to a tight CO-7 and CO-8. The CO-8 is the closest race out of 435 in my forecast. NM-2 was seen as Tilt R by many early on, but Gabe Vasquez has a great shot at upsetting Yvette Herrell. 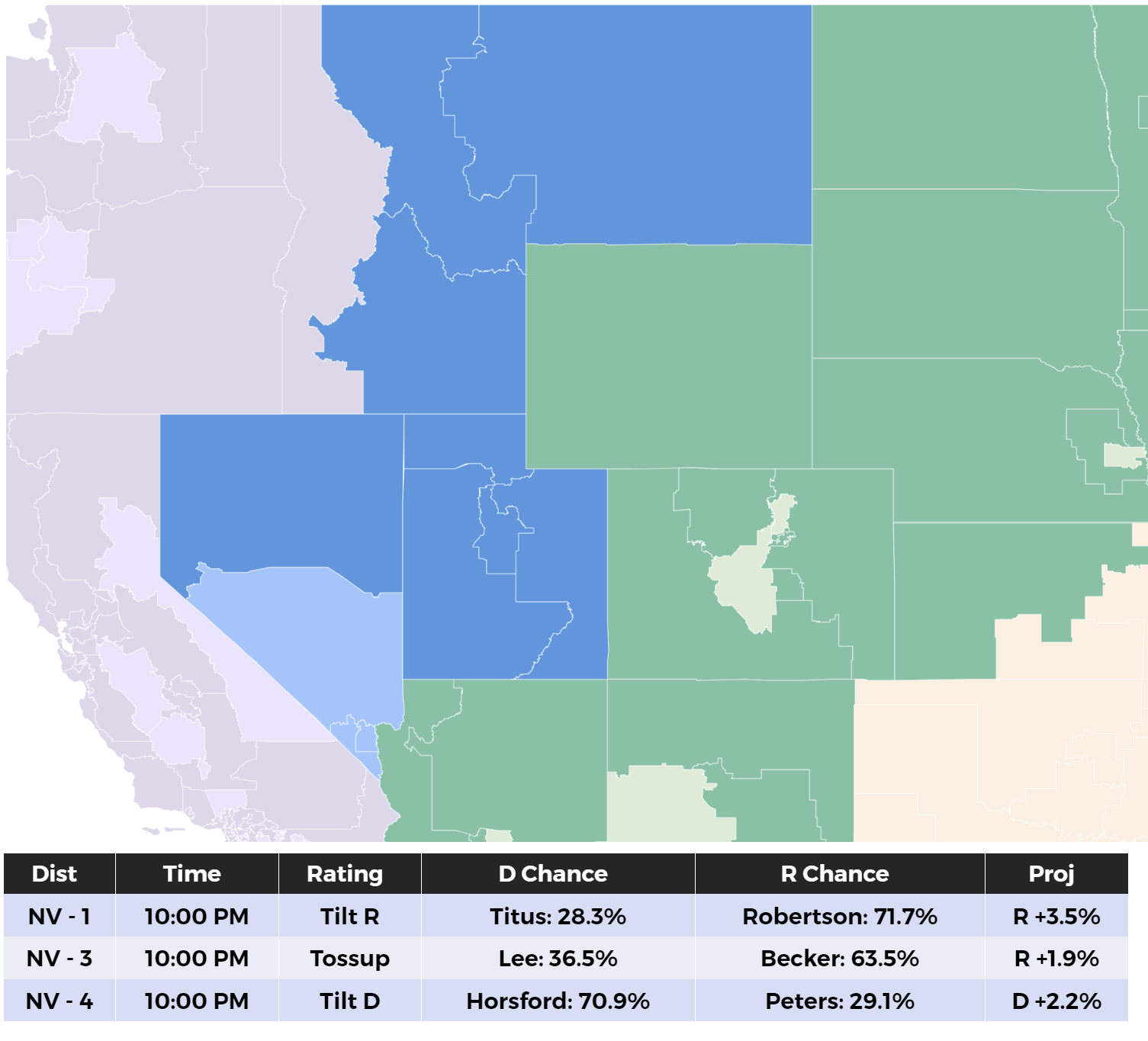 At 10 pm, all eyes turn to Nevada - home of not just a key Senate and Gov race, but three uber-tight races. We could see Dems win 3/4 races in Nevada or even a clean sweep by Republicans. 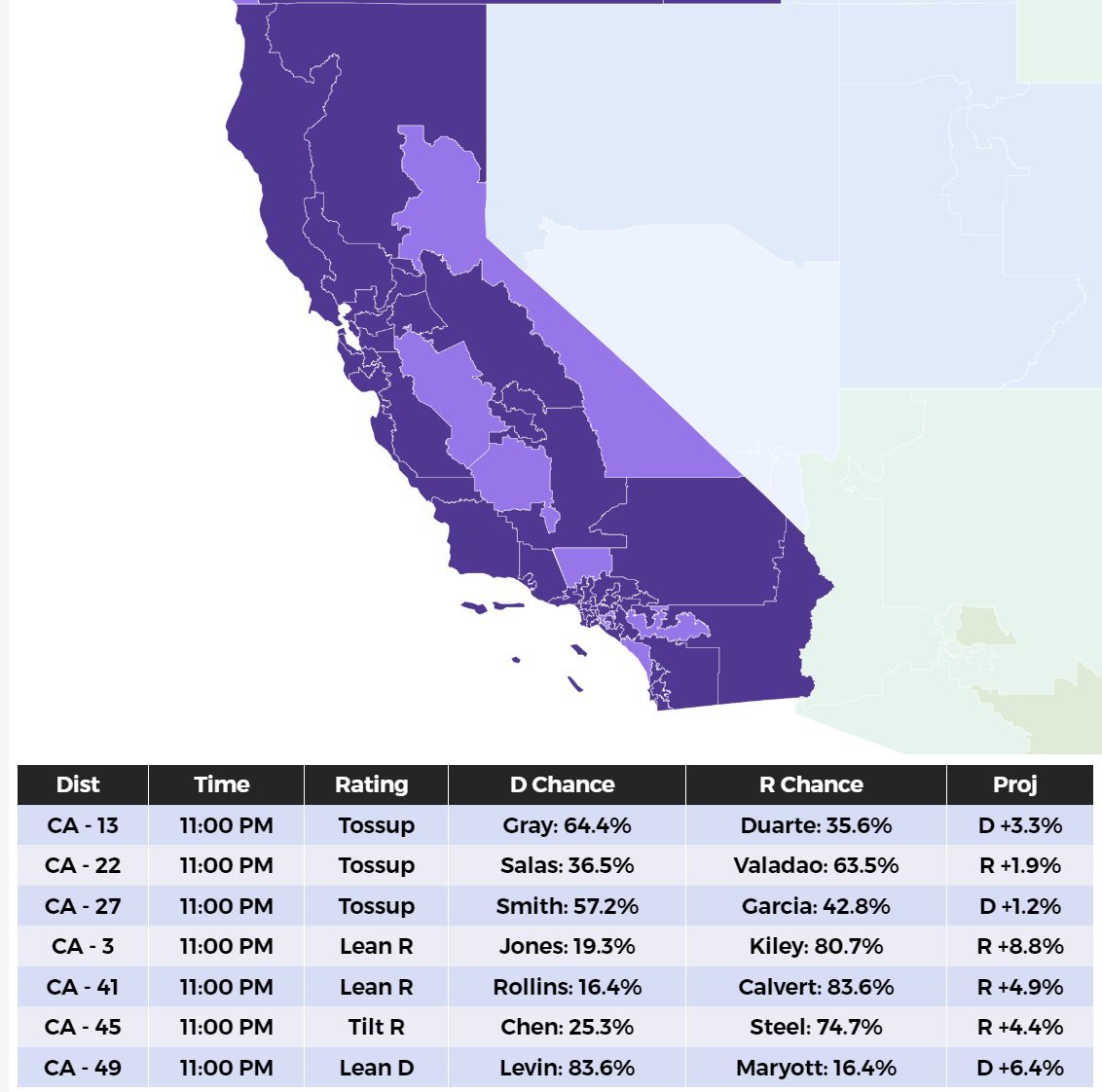 Just like in 2018, expect California to play a starting role in this election. Pay special attention to the CA-27. Mike Garcia is a conservative republican that has been able to keep winning in a blue district. Polls suggest his race will be close. 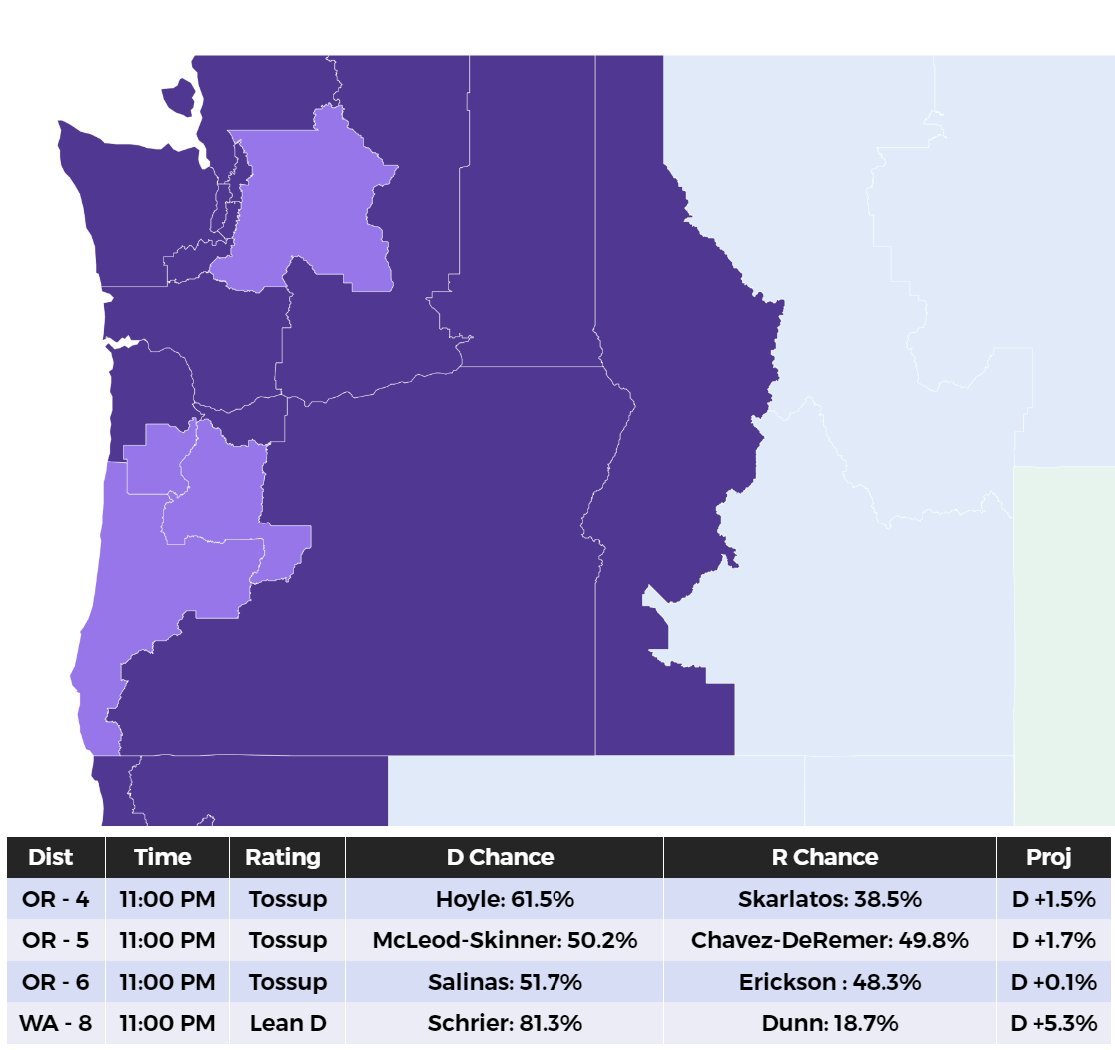 Could Democrats face headwinds in Oregon, thanks to Kate Brown's popularity issues? Polling in both the Gov races and three House races is quite tight. In Washington, Kim Schrier looks to prove she can win even in more challenging cycles. 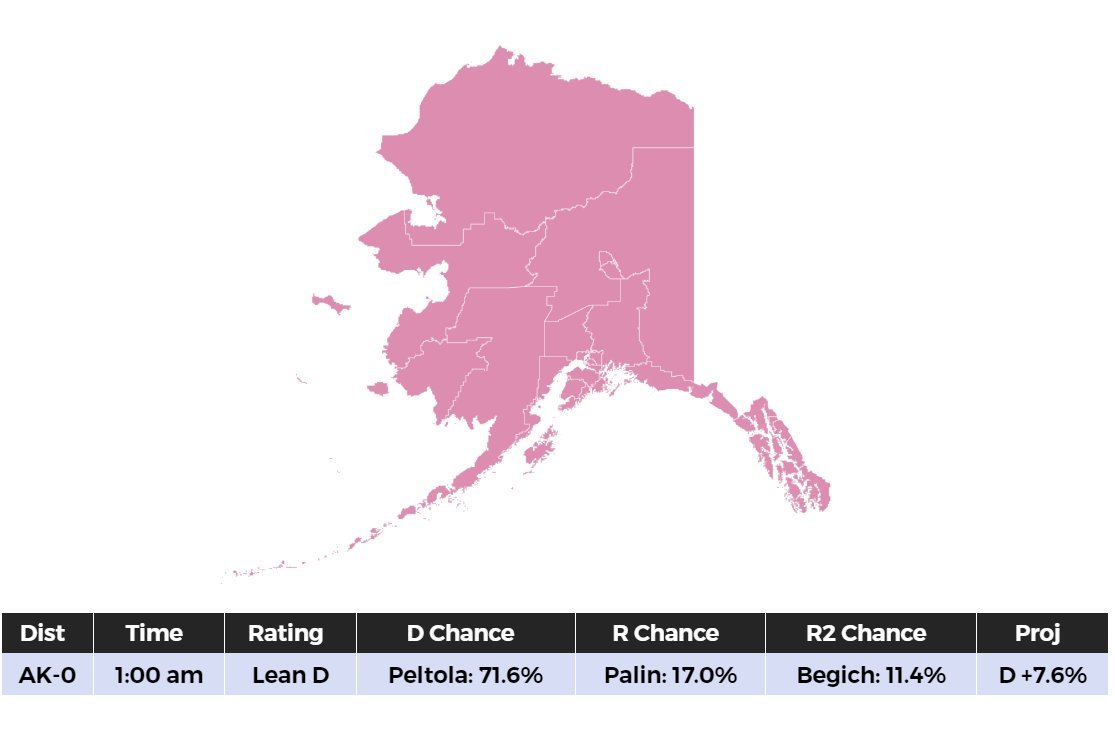 Last, at 1 am, polls will close in Alaska. Don't expect the results to come in anytime - between mail-in votes and ranked choice voting, we may not know if Peltola beats out Begich and Palin for more then a week.

PennsylvaniaFettermanOz2022Senateelectionmidterms
Logan Phillips
Next
Next

Michigan Has Become Ground Zero in the Fight Over Abortion.